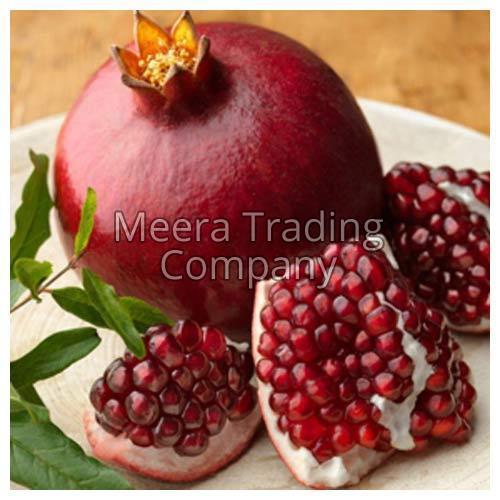 The pomegranate belonging to the Lythraceae family is a fruit-bearing deciduous shrub which grows between 5 and 10 meters in height. It was initially found in the Mediterranean region, but was later introduced into Spanish America and California in the later part of the 16th century by the Spanish settlers.
It grows well in many regions of the world of which the Indian subcontinent is one of them.

Production and Export
Besides Chile, Peru, Egypt, Israel and Turkey India is also a large supplier of pomegranates to the European market where the fruit is unable to be cultivated because of its climate. Fresh Pomegranate Suppliers in India supplied the South Asian markets with the fruit whereas Chile catered to the American market in competition with the South African exporters.

Uses of the Fresh Indian Pomegranate in the Culinary World
The fruit has multiple uses in the culinary world. Its juice which is either sour or sweet with most fruits having a moderate taste is primarily used as a juice. It was previously a popular drink in Europe and the Middle East is now introduced and distributed in America and Canada as a juice because of its health benefits. The thickened juice known as Grenadine Syrup is used in cocktail mixing.
Before the tomato was introduced to the Middle Eastern countries, pomegranate juice, molasses and vinegar were commonly used in Iranian main dishes in the form of a thick sauce made from pomegranate juice and ground walnuts.
Its seeds are used as a spice known as anar dana in Indian and Pakistani cuisine. The ground anar dana gives a deep and tangy flavouring to the dishes. It is also used in trail mixes, granola bars, as a topping and dressing for salads and desserts, yoghurt, ice cream, marinating of meat and in a variety other ways.

Where to Get Pomegranates?
Of all the healthy foods loaded with nutrients and strapping plant compounds, pomegranate is one of them. It is a much sought after fruit because of its multiple health benefits. So a number of Fresh Indian Pomegranate Wholesalers in India are can be approached to take care of the needs and demands of the local market.

This entry was posted on August, 07, 2021 at 17 : 09 pm and is filed under Fruits And Vegetables. You can follow any responses to this entry through the RSS 2.0 feed. You can leave a response from your own site.